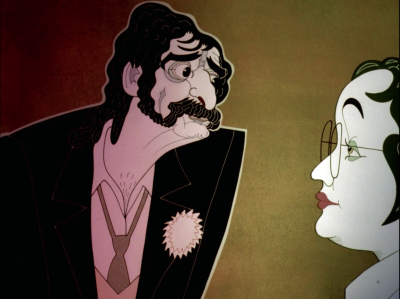 In this stylistically bold experimental animated documentary musical, which portrays the disillusionment of the young generation of the 1970s in Hungary, painting and documentary are intertwined. Painter György Kovásznai was an outstanding figure of Hungarian animation at its prime in the 1970s. This modernist feature film is a forerunner of today’s animated documentaries, which have become a popular genre recently. The main storyline of the film is put on hold several times with the insertion of animated documentary interviews with live audio recordings. The painted musical animation is also emblematic of Kovásznai’s graphically expressive animation style, which radically contradicts the conventional principles of character animation. This film is centred around a love triangle while painting a picture of the streets of Pest. The film’s enthralling musical scores were composed by János Másik from the legendary band Kex. A new digital restoration in 4K was made available with the support of A Season of Classic Films in 2021 and is the labour of the experts of the Hungarian National Film Archive and Hungarian Filmlab.