It seems that the publication of István Orosz’s books are always scheduled for KAFF. In 2011, his book of unusual genre titled The Ambassador and the Pharaoh, a work featuring cultural history hypotheses and romantic twists and turns, was premiered at the festival, and in 2015, his essay novel titled Chess on the Island was also published at the time of the festival.

And now he brought us two freshly released works, the “illustrated history lecture” called Örömajkon örömének (“Merry Song on Merry Lips”) and a longer novel titled Paternoster. The former, the richly illustrated history work, was actually the idea of Marcell Jankovics and the publisher, Gábor Méry—they thought of creating a volume to be paired with Jankovics’s illustrated album Trianon. The new album was to summon the period between 1945 and the change of the political regime of Hungary and other countries that were stuck behind the Iron Curtain with many pictures and lexicon-like conciseness, primarily aimed at those who were born after that period, or who lived through it but are able to view the absurdity, paradoxes, contradictory world of this grim and rather two-dimensional period with irony, and who might even be able to laugh at it by now. 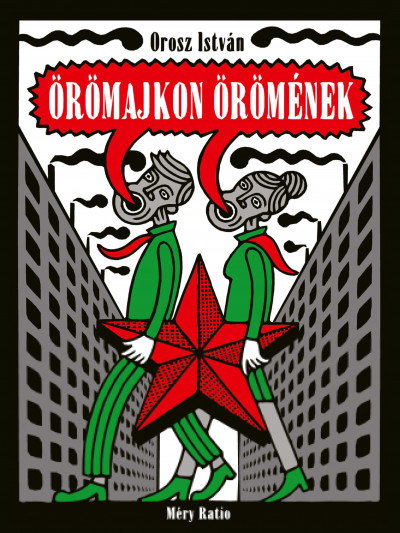 The novel, Paternoster, is mostly set during the Rákosi and Kádár regime too, although these are viewed from the perspective of the times after the regime change, which refers to the distorted lenses of the artist-author’s anamorphic technique, if one might say so. Above a carpet of crime story-like excitements and credible political curiosities, unbelievable facts and made up absurdities, the plot, “woven of accidental, glittering threads”, balances on the silk thread of a love story. Necessary coincidences fuel Orosz’s novel, the first review of which went like this: “In Hungary, there has never before been created such a graphic description of the realities of the intellectual class living in the fifties.”